Another Irish trip into the golden nectar for Paul, with homage to John Teeling.

Is it Whisky or Whiskey? The difference between the two is the spelling of whisky. Scotch whisky is spelt without the E, Irish Whiskey is spelt with an E. Och, it goes back a long way to when the Irish wanted to be different from the Scots. Whisky is the anglicised version of the Gaelic – uisge beatha (pronounced “oosh-ki-bah”). Gaelic is native to both Ireland and Scotland. As well as spelling, there are big differences in how whisky is produced in Ireland and Scotland. Scotch is made from malted barley, and other grains, in a copper pot still and matured for a minimum of three years and one day (leap year folks!).  Irish Whiskey is made from unmalted barley and other grains, in a copper pot still and matured for a minimum of three years. Scotch is usually distilled twice (but there are distilleries not adhering to this – Mortlach and Springbank are just two) and made completely from malted barley. Single malt and blends are popular and made from a mixture of malted grains. Beware of the David Beckham slosh!  Irish on the other hand, is mostly triple distilled, which makes its’ smoothness. It is also more likely to be made up of a combination of grains, not just barley. The extra distillation has the biggest effect on the difference between the flavours of Scotch and Irish Whiskey. It gives Irish whiskey a lighter flavour, and feel smoother.  There are exceptions, such as Auchentoshan (Scotland) using triple distillation and Kilbeggan (Ireland) having double distillation. Single Pot Still, made from malted and unmalted barley grew out of using unmalted barley, as malted barley was taxed in Ireland.

Still with me?  Whiskey expert Mr John Teeling (whom I met a wee while ago and toured his distillery) warned that there may be a shortage of Irish spirit in the next few years, due to surging global demand. Mr Teeling, said “the Japanese market is already experiencing similar problems due to the popularity of its’ product. Soon there will be a shortage of Irish whiskey” Mr Teeling (72) told The Irish Times. “What we are making now, you won’t sell for seven years. So we will have a shortage if the rate of growth continues at a cumulative rate over the next six or seven years.”  Mr Teeling, who sold Cooley Distillery to Japanese drinks group Suntory for €73 million in 2012, said Suntory is withdrawing its Hakushu 12-year and Hibiki 17-year single-malts because they have no whiskey left. Suntory’s chief executive Takeshi Ninami has said it could take up to a decade for Japanese whiskey distilleries to meet demand from consumers and retailers. Watch out Scotland, we all know there is a worldwide whisky boom! John Teeling built the Great Northern Distillery (GND) at the old Harp Brewery in the border town of Dundalk to supply bulk malt and grain whiskey to new brands on the Irish market. Meanwhile, his two sons set up Dublin’s first new distillery in a century in the Liberties in Dublin – Teelings. GND is fully operational and has the capacity to distil the equivalent of 42 million bottles of whiskey per year. “Great Northern is successful because the market is growing so strong,” he added. “But there is no aged malt in Ireland. It’s all gone and all the Cooley-aged malt that Suntory bought and sold for even higher prices is gone.” The Town of Dundalk has always been ideally suited to foster a distilling industry with access the purest water from the nearby Cooley Mountains. The Dundalk Distillery operated in the Town between 1708 and 1926. Two of the distillery buildings, the grain store and maltings, still exist and now house the County Museum and Dundalk Library.

Am out of breath now, time to relax with Burke! 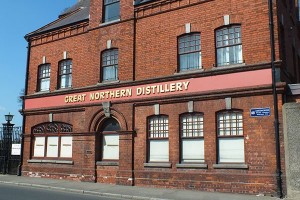