… AS I left Perth around 8am on the Thursday, driving up to Broughty Ferry to pick up Liz, the weather was totally Scottish, as anyone who has been here knows. It can be 4 seasons in one day, it was!

All in the space of 35 minutes. No matter, we headed towards Aberdeen (we don’t much like trawling through this city – no by pass) we were chatting as usual about whisky – is there any escaping it? Driving through all the 30mph zones until past the airport, we then took a road to Old Meldrum.

Oldmeldrum is a small town north east of Inverurie in Aberdeenshire known as the ‘Granary of Aberdeen’ for its production of high quality barley. Which is very handy for one of the oldest distilleries in Scotland, Glen Garioch founded in 1797. With a growing population of over 2000, Oldmeldrum is in Scotland’s top 300 centres of population! Eh?

The Battle of Barra was fought in May 1308 near the Hill of Barra (no far away) between the armies of Scots King Robert Bruce and John Comyn, 3rd Earl of Buchan.  Our first stop GLENGARIOCH Distillery. The location chosen by John & Alexander Manson for their malt whisky distillery in 1797 in the’Valley of the Garioch’. The distillery originally incorporated a brewery and tannery.

The Garioch — pronounced ‘Geery‘ by the way – where barley and crystal springs have been abundant for over a thousand years. In 1968 the production of Glen Garioch was suspended on account of ‘chronic water shortages’, however in 1972 a manager was appointed with a brief to find another water source. A spring was discovered on a neighbouring farm. It came to be called ‘The Silent Spring’ as it could neither be seen nor heard. So how did he find it the question must be?

It is operated by Morrison Bowmore Distillers, which is owned by the Japanese company Suntory. After introductions, we set out with Alistair for our private tour, he took us into every nook and crannie, even inside the old kilns! Not a distillery such as Glenfiddich this one, much more of a true working distillery, dust, muck and grime – we loved it! Liz found this to be one of the best distillery tours she has had, so there you are. As per usual we ended up at the tasting desk with Alistair and a few other onlooker staff members, and – as usual myself being the driver, looked on with envy as Liz tucked in to drams, her favourite being the Renaissance . So much so I bought her a bottle, leaving an eighty pound hole in my wallet! But it IS a good dram! Bidding everyone farewell we drove north to Huntly, almost persuaded ourselves to call in again at Ardmore, but we resisted – though we did bump into Alistair Longwell (Ardmore dist. Manager) in the car park, said hello etc, before leaving for Keith then Elgin. Just the two of us today so no need for tourist stops or dramming stops with our whisky guests. 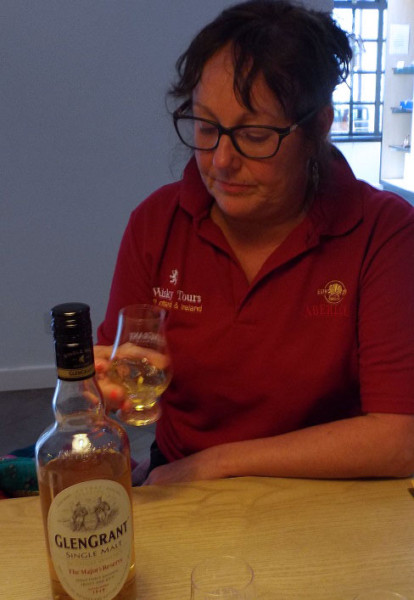 Back to our hotel from the other week (Spirit of Speyside) to collect a case of whisky we couldnee manage to take with us before, grand stuff – another story. Then another pre planned visit, this time near the RAF base at Lossiemouth; Windswept Brewery. Aye, a brewery, we also operate and offer whisky & beer tours, with a tour booked in later this year (whisky & beer & curling) requesting beer, I chatted to Natassia and arranged our visit. A look around and a taste (Liz) and a chat about bringing wee tour groups here. We just cannot visit Elgin without calling in at Glen Moray, one of our favourite distilleries, so we did! Ah but no whisky this time, just needed a jacket for our coach driver mark, so a quick hello to Iain and away again.

Driving south now, we stopped at Glen Grant Distillery for another arranged visit.

A great Single Malt’s true personality is the reflection of its Master Distiller. No one knows Glen Grant more than Dennis Malcolm, who started at the distillery as an apprentice cooper at just 15 years old. For the past 50 years Dennis has dedicated his life to maintaining the quality and integrity of Glen Grant.

Another private tour, a short one though, Marilena took us round, where once again Liz was impressed, no time for the gardens today, but she (Liz) did find time for drams! Liking them so much she bought a bottle Major’s Reserve @ £22, er just a mo, I pay £80 and Liz sorts out £22, something no right here.

From here to our digs in Dufftown and our evening to look forward to with Ingvar and Peter his friend fae Edinburgh (though, also Swedish) who takes the photographs for the yearbook. Can I say just noo, our digs; it was like stepping into an old hippy joint in the 60’s (aye I can remember), what a weird place, my room was definitely haunted, Liz had a note in her bathroom saying if she wanted to use the bath it was £10 extra! We both had dead flowers in the bidet, my bathroom had a red light! Our host was just as “different”.

When we met up with Ingvar and Peter we told them of our plight, even Allan (owner of their guest house) said our place was “strange” apparently everyone in the wee town knows this – we didnee – before we got there. Anyhow, the meal was great, the drinks even better and of course the company was excellent! Over three courses, several large drams and bottles of wine, we tried hard to enjoy ourselves! We managed it! A great dinner/drinks evening, then a return to hippyland. If you don’t like 12 towels of different colours, wee lace doily’s everywhere, overly fussy things, ribbons and bows everywhere and strange people, dinnae go there! We will NOT be back, that’s to be sure.

Each of us was worried about being alone at breakfast next morning, so decided to share breakfast at 9.30 as agreed with miss hippy. It took us til half ten before we could escape, and escape we did. Back doon the road and home to the Ferry, laughing at our experiences along the way. Was it worth the long drive for one night? YOU BET. See you again soon Ingvar.