Being a McLean I HAD to pay a visit, even before they were officially open. Ncn’ean (pronounced Nook-knee-anne), is short for Neachneohain, a witch-queen in Scots Gaelic folklore who, according to Sir Walter Scott, ‘rode on the storm and marshalled the rambling host of wanderers under her grim banner’. Ncn’ean Distillery resides on the Morvern peninsula, not that far from the Clan Maclean HQ at Duart on the Isle of Mull. My first visit was the day before the Oban whisky festival some years back, stupidly, I drove there, along one of the worst of the west coast roads, next time will be by boat for sure – with Ingvar next May. Ncn’ean has been designed as the first fully organic distillery in Scotland powered by 100% renewable energy. Wood chips for the biomass boiler are sourced from a local forest, while all by-products are recycled as animal and plant feed on the remote (an understatement) estate on which it sits. The farm distillery was designed by the late Jim Swan to produce a light, fruity spirit, with slow mashes, long fermentations, horizontal lyne arms and shell and tube condensers, the wood will be focused on ex-Bourbon and red wine casks, with a wee sherry influence. Two dunnage warehouses, sit on the hill behind the distillery.  The Drimnin Estate came to the Lewis family in 2012, the estate itself had been Maclean clan territory, and formed part of the Drimnin Castle grounds, was sold by Charles Maclean in the late 18th century. By 2013 the Lewis family’s plans to build a distillery were underway, daughter Annabel Thomas leaving her job in London to manage the project as CEO of the newly established Drimnin Distillery Ltd. At the start of 2017 the new name Ncn’ean was chosen – Drimnin Distillery Ltd will soon also be renamed Ncn’ean Distillery Ltd. The first whisky to be released by Ncn’ean distillery is expected in 2020. I should request that the first bottles be available to Clan Maclean members to start with, both here in Scotland, and those living away from Alba. If this comes true I will be astounded though, but it’s a grand idea. I had a great tour that day, even given cakes and tea by my host. We went doon to the pontoon where, future visitors might arrive from Oban and Mull. Booking is essential. Booking a  tour Tobermory-Drimnin-Tobermory  the water taxis included.

The Clan Maclean Heritage Trust was established by the Clan Maclean Association in 1996 to recognise and cherish the heritage of the Clan Maclean around the world, as well as in Scotland, and to educate the wider public about it. The association restored the ancient Maclean burial aisle at Lochaline in 1992, by erecting a cairn in 1996 at Drimnin pier to commemorate Charles Maclean of Drimnin who was killed leading the Clan Maclean at Culloden in the ’45. The Maclean clan maintained control over the Sound of Mull and its adjacent lands through castles stretching from Mingary on Ardnamurchan to Duart (the current clan headquarters) on Mull.  Each had line of sight to the next in line so that messages could be passed down the Sound. Sited prominently on a rocky outcrop, Drimnin castle was one of these within sight of Mingary and Aros on Mull. The tomb of Allan Maclean, the last of the Drimnin Macleans, lies on the ridge above the Mains. Allan Maclean fought on the losing side at Culloden and subsequently became a fugitive, reporting going into hiding on Drimnin and later forfeiting the Estate in bankruptcy as mentioned above. The MacLeans of Drimnin are descended from John Garbh, elder son of John Dubh of Morvern by his third wife, Margaret. John Garbh was first married to Jannet, daughter of Hector, fourth laird of Coll, and by her had one daughter, married to Martin MacGillivray of Pennyghael. His second wife was Mai-y, daughter of Lachlan Og, first MacLean of Torloisk, by whom he had Margaret, married to Hector MacLean of Treshnish; Jannet, married Malcolm MacDuflie of Colonsay ; Catharine, married to Ewen MacLean of Ballyphetrish, in Tiree, and Charles, married to Marian, daughter of Neil MacLean of Drimnacross, by whom he had Allan, Hector, John, and Mary. Allan was married to Catherine Stewart of Ireland, and had several daughters. He was a captain in Sir John MacLean’s regiment at Killiecrankie and Sherifi”muir, and killed in the last named battle. We Macleans can be a warlike people and loved nothing better than a good fight (just check out the Battle at Inverkeithing).

The execution of King Charles I at Whitehall on 30th January 1649 changed the course of the Civil War. The Scots, who had been foremost in their opposition to the king were appalled at his judicial murder and recognised his successor. Cromwell hurried north to deal with his former allies and on the 3rd September 1650 destroyed Leslie’s army at Dunbar. The Scots still held Scotland north of the Forth. Charles II threw in his lot with the moderate covenanters, led by the marquess of Argyll, and on 1st January 1651 received the crown from Argyll’s (Campbell) hand at Scone. Ten days later the Scots Parliament appointed the 27-year-old Sir Hector Maclean of Duart colonel of a regiment of foot. By the morning of 17th July 2000 Cromwellian troops were ashore at North Queensferry. The English began to dig in. They were now at their most vulnerable. It seems likely the Macleans reached Inverkeithing after the battle had begun, which is not surprising considering the distance they had to cover from as far as Borreray. Their leader Sir Hector had proved himself in his dealings with cattle-raiders. There were also plenty of veterans in the ranks of Macleans and their allies who marched to Fife, and it is probable that morale was high. The regiment was armed with pikes and muskets. In addition each man will have had a sword and targe (shield), the leather circular shield of the Gael. A clan regiment was different to normal units in that it was a family affair. Fathers and sons marched together, and whole extended families, such as the Macleans of Ross, ‘the Race of the Iron Sword’ formed at least one company. Brolas was Lieutenant Colonel, whilst chieftains such as Kinlochaline commanded a company of his own friends and neighbours. One man, Lachlan mac Ailean Maclean of Hynish in Tiree, is described by his descendant Allan of Crossapol in Coil as a ‘Captain’. This is a term then used either to describe a professional soldier, who had served overseas, or had been the garrison commander of a castle; in this case the castle was probably Drimnin Castle. As the Macleans reached Inverkeithing they met the first fugitives fleeing from the Cromwellian cavalry, their infantry and artillery were close behind them. The Macleans stood their ground. It was now that they achieved immortality. Shot down by cannon fire, trampled under horses’ hooves and finally overcome by Cromwellian pike-men they sold their lives dearly. Eight of them are said to have thrown themselves between their chief and the enemy pike-men crying out as they did so: ‘Another for Hector’, Fear eu airson Echuin. From 800 who arrived, 750 were slaughtered. Few received quarter, the Cromwellians regarding Gaels as little more than vermin. 40 eventually found their way back to Mull.

Inverkeithing was as great a disaster for the Macleans as Inverlochy had been six years earlier for the Campbells. At Inverlochy Argyll (the Campbell chief) had watched the slaughter of his men from his galley, and then cowardly slipped away to sea. The Campbells ran. At Inverkeithing Sir Hector stood his ground. His clansmen surrounded him and they were all slaughtered together. We remember that sacrifice well. I would like to think, when the first whisky becomes available, 740 bottles would be offered for sale to Macleans around the globe, I for one would participate. It will be interesting to see what design appears on the bottle label.; Fear eu airson Echuin. Or more pertinent Charles Maclean; Charles MacLean  4th of Drimnin. Born Drimnin, Morvern, Argyll, Scotland. Died 16 Apr 1746  Culloden, Invernesshire, Scotland 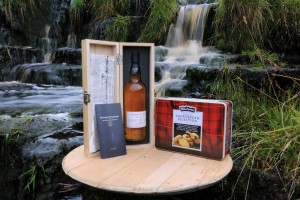 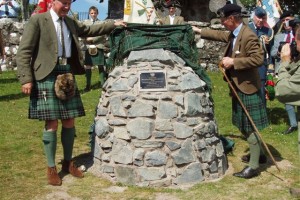