It’s true, the monkey is on top.  Monkey Shoulder has topped Johnnie Walker as the best-selling Scotch whisky among the world’s top bars. According to the 2019 Brands Report, compiled by industry magazine Drinks International, bartenders named Monkey Shoulder the best-selling and trendiest Scotch whisky. Johnnie Walker came second best-selling Scotch (am thinking it’s the red label), with Laphroaig in third place. The report is compiled from a survey of award-winning bartenders, bar owners, managers and head bartenders working for award-winning bars around the world. Monkey Shoulder was named the preferred Scotch at 22% of bars, with Johnnie Walker named by 17%. Monkey Shoulder released a peated– Smokey Monkey – after repeated calls from bartenders for a smoky, mixable blended malt. Blends (including Monkey Shoulder) accounted for 40% of the best-selling Scotch whiskies, and just 20% of the most asked-for brands. Personally, I like a monkey now and again, the Fiddich folks have done a great job here, a superb blended malt from William Grant, made with three Speyside distilleries Balvenie, Glenfiddich and Kininvie all owned by the Grants. The result is a smooth, creamy, supple and very malty Scotch which works superbly well neat, over ice, or in whisky cocktails (where it really excels). Rooted in Malt Whisky History, inspired by the malt men who turn the malting barley by hand, a malt man’s skill is turning the barley by hand. Years ago, malt men would develop a strain injury known as Monkey Shoulder. The whiskies, which are matured in first-fill ex-Bourbon casks, are vatted/blended together in small batches for up to six months before bottling at 40% abv. Nae grain in here by the way. 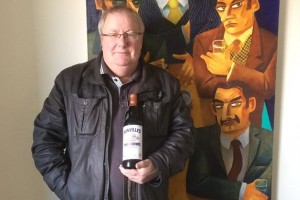 Monkey Shoulder’s history begins withWilliam Grant puting his entire life savings of £755 into the construction of Glenfiddich Distillery in 1886. Five years later Balvenie was opened on the same site and almost a century later they were joined by Kininvie in 1990. Launched in 2005, Monkey Shoulder filled a gap for a fun premium brand that made bartenders happy. William Grant’s Lowland distillery Ailsa Bay is mature, they have plans to cease communicating the provenance of Monkey Shoulder’s malts, allowing for the potential to utilise stocks of its full malt portfolio. WILL THE FLAVOUR/TASTE CHANGE?

So where do they go from here? We have the original, the peaty, do we look forward to the itchy, the hairy, the caged, the wildside? And what do you think Mr Walker is doing all this time? He won’t be sitting down, no, he will be walking even more to regain number one fae the monkey! Are we to see more whisky incorporated into cocktails? How does it compare to say, the brothers Chivas or Mr Dewar? How long before we see blends only at whisky tasting events? Well, me for one will be continuing to hang around Tesco where I saw it for 20 quid, cannee beat that. Well maybe, they also had a Tamnavulin at 20 quid and a Jamesons stout finish for the same money. Talking of Irish, how long before we see an Irish Monkey? The Dunville Monkey???