A tour of Irish Distilleries venturing into their culture of whiskey and grand beers. An edited blog from a much longer piece of drivel by Paul.

Monday started late. Teelings at noon was our scheduled visit and it was good! A complimentary visit (thanks) led by Ruard, who knew his stuff (makes a change for some distillery guides),  all the staff here are young, very young and I wonder what they actually know about whiskey? Our welcome at reception? Not good, they didnee wish to know, too busy chatting to each other. We were told “take photos anywhere”,  so we did, the pot stills come from Italy, Sienna, 19th century design/shape.  There were NO padlocks on the spirit safe, they have 5 distillers on a rotating basis, the small batch 80% corn, 20% barley. We tasted 3 drams; grain, small batch and single malt (a 6 wood job 9year old). Teeling Distillery is the first new Irish distillery in Dublin in over 125 years and right back where Teelings started in 1782 and only a stone’s throw away from where Walter Teeling’s old distillery was. Located in an ancient market square called Newmarket (not really a square) in the heart of the Liberties of Dublin. Their philosophy is that while they are respectful to the heritage of Irish whiskey, as a new generation of Irish whiskey makers they are confident to forge a new future for Dublin and Irish whiskey. After our tour we hit their bar, Dave had another single malt, I went in for a cocktail and was told it’s a girly drink, och well. Overall impression; very touristy, hard line whisky tourists would be bored, it’s more a tourist destination than a distillery. We headed into Temple Bar, some grub and some cultural research (drinks). 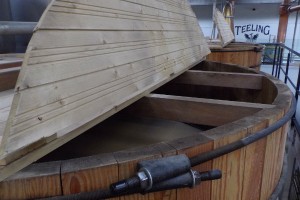 Tuesday we met PJ from the Malt Teasers whiskey club, swapped stories, rounds and bottles of Irish whisky. The remainder of the day spent researching. Wednesday saw us fall into the Irish Whiskey Museum depicting the origins of Irish whiskey, its rise to glory, its dramatic fall and of course, the revival of new Irish whiskeys. Again, it is a tourist trap, not really a visit for hard line whiskey nuts like myself. No one knew what to do with us, even though we had pre – arranged our visit, we didnee even get offered a dram! We left for the pub. I delved into a Powers, known as the Priests Bottle because it was always kept (in Ireland ) for when the Priest came to visit. At McDaids bar we were having a quiet drink when a film crew came in and interrupted us! So we chatted to 10 folks from USA who had won a bar tenders competition from Tullamore DEW.  Thursday; pubs. 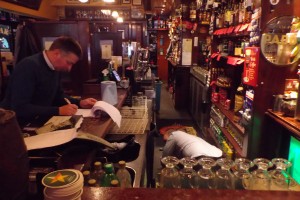 Friday, a taxi to the railway and a train to Drogheda. The Great Northern Distillery welcomed us. John Teeling was going to take our tour, but a board meeting came up so we had another guy, who knew nothing. They have column and pot still runs here, though all they do is make new spirit, sell it on. They run 24 hours x 5 days a week – the train station is right beside the distillery in Dundalk which was real handy.  You can see the pot stills from the station carpark (Laura PA to John Teeling (Chairman) was my helpful contact here, a true LFC supporter!). John Teeling, also known as the founder of Irish whiskey renaissance, used to own the Cooley Distillery. In 2013 he acquired the GND after selling Cooley to Suntory a year earlier, he now supplies new make and grain to other distilleries and own labels. This is a huge site, former Diageo (Harp brewery) it’s a 5.5 hectare site of which 2 are used now. There is a grand pub opposite, Kennedy’s, we researched more in here, barman John is Scottish! We headed back to Donore for overnight. I must apologise to Sally Anne at Boann distillery – we couldnee make the planned visit – but I will do the blog as promised.  Saturday we headed back to Dundalk (don’t ask), a donder around Dundalk, great station information on the 1916 rising, loved it. 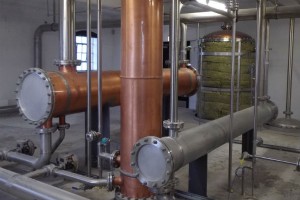