News broke this week that Conor McGregor is stepping out of the octagon and into the world of Irish whiskey. He has arrived, armed with his new brand of blended whiskey ‘Proper No.12’. McGregor’s entry into the world of whiskey shouldn’t come as too much of a shock to those eagle eyed among you, as he has been touting the plans for his own whiskey brand ever since his defeat to Floyd Mayweather. So, with new brand name in hand, Proper No. 12 was launched yesterday in the U.S. and will soon become available in Ireland. The name is not to be confused with an age statement, it is actually a reference to Conor’s Dublin 12 upbringing in the Dublin suburb of Crumlin. It was here that McGregor learned to fight, and the name of the brand pays homage to his hometown. One thing that has struck a chord with many people around the world is McGregor’s love of his fans, and this tribute to his hometown of Crumlin will likely strike a chord with many.

Again, a wee section of the full story, which I encourage you to read, many thanks Matt, keep workin away on these stories 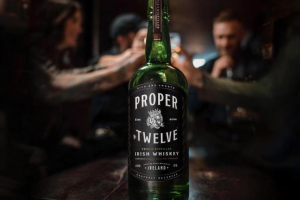