A Chivas Regal day exploring distilleries with Ann Miller (International Brand Ambassador) was a highlight of my recent tour schedule. With 30 years’​ experience in the world of scotch Whisky, Ann is based in Speyside. She speaks fluent French and Spanish with a splattering of German. Her background is in marketing and public relations. Ann was one of the founders of the Spirit of Speyside Whisky Festival nearly 20 years ago and serves as one of its’ volunteer Directors.  Ann is an acknowledged expert on all of Chivas Brothers’​ whisky brands – Chivas Regal, Royal Salute, Ballantine’s, The Glenlivet, Aberlour, Longmorn, Tormore, Scapa and more, as I found out. It was while on tour driving for Ingvar  Ronde I met Ann, a lovely lady. We met at the Allt-A-Bhainne Distillery for a morning tour. I have driven past many times but not been inside – until today. Intro’s over, we hit the still room, it is all on one level in one large room, quite an easy one to take in. All the equipment is contained in a single room with mash tun at one end and four stills at the other, it has also occasionally produced a heavily-peated variant. Allt-a-Bhainne is only very occasionally seen as a single malt bottling. It was built by Seagram in 1975 when the Canadian firm (which at the time owned Chivas Regal) was increasing its production capacity. Mothballed between 2002 and 2005 but with global demand rising, Chivas has it in full production once more. Allt-a-Bhainne has a large capacity of approximately 4 million litres per year and it was primarily producing whisky to go towards their blended brands, as Seagrams sold off their assets to other drinks companies, primarily Diageo and Pernod Ricard. Pernod Ricard took over the distillery and production started again in 2005. Our visit was good, we then followed Ann down to Aberlour, where we shared lunch in the Mash Tun.  From there to the distillery. 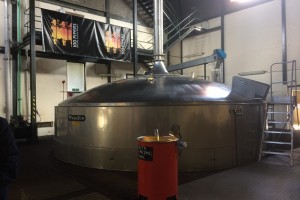 James Fleming, son of a local tenant farmer built Aberlour Distillery in 1879 after having worked at Dailuaine, for ten years. Producing whisky from 1880 onwards until his death at the age of 65 in 1895, Fleming is buried opposite the distillery in the village cemetery. Robert Thorne & Sons bought the distillery and ran it until 1921. In 1921, Robert Thorne & Sons Ltd. sold the distillery to W. H. Holt & Sons, a brewery near Manchester. In 1945 S. Campbell & Sons Ltd. bought the distillery. In 1975 Pernod Ricard acquired Campbell Distilleries (Ann also worked for them), and they joined with Chivas Brothers in 2001. Our tour was great, Ann is a mine of information and she did Ingvar proud with the drams, including a new make he enjoyed. I do like Aberlour and its drams, especially the A Bunadh.   We then took to the road for Longmorn. The Longmorn Distillery Company was founded in 1893 by John Duff, Charles Shires and George Thomson. Duff was a former manager of the Glendronach and the Bon Accord Distillery in Aberdeen, and was the founder of the Glenlossie Distillery. Started in 1894. Three years later John Duff built the Benriach Distillery (which I also like visiting) next to Longmorn, but both were affected by the collapse of wholesale buyers Pattison, Elder and Co. in 1898. Duff was ruined by the collapse, and Longmorn Distilleries Company Ltd. passed through a variety of ownerships. In 1970, Longmorn joined The Glenlivet and Glen Grant to form The Glenlivet Distillers Ltd. This was bought by Chivas Brothers in 1978 and in 2001 Chivas Brothers was acquired by the French Pernod Ricard Group. In April 2018 Ingvar Ronde and myself inherited a tour there!  It was good, what can I say, we had a grand day with Ann, sorry to wave goodbye. The day ended as we shared drinks at the Drouthy Cobbler in Elgin, I rang my pal to see if he was free, aye – so he came along for a drink and chat – Vic Cameron, ex Diageo!  Great day. 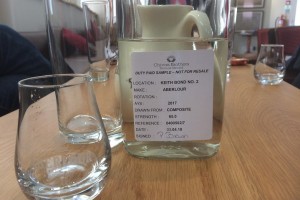