The visit was part of a whisky tour by Paul with Anders (Finland). Russell was happy to receive us, many thanks go to Alex for his help, have known him a wee while, it helps to have friends like him. I have been here a few time and looked forward to this, well in advance! Ardmore Distillery, near Kennethmont in Aberdeenshire – near Huntly for those without a map (is in a nice location that another pal of mine knows very well as her family hail from there – Linzi) with – as many distilleries do, a railway line running alongside, with its’ own signal box. Am told they get their water from no less than 16 springs up on the Knockandy Hill. Maybe more famous for their Teachers brand, this used to be really popular when I was young, almost no pubs stock it now in Scotland.   Its’ main markets now linger would you believe in Brazil and India! The distillery has capacity for 5.5 million litres of spirit annually and is now a Beam/Suntory  prisoner.  Last time I was there I was no driving, as our group was 14 or so very nice Swedes, so lucky me was co-pilot on a coach, woo hoo!  Meaning I could sample the goodies.

The history lesson; It was 1898 Adam Teacher, son of Glasgow blender William Teacher, decided that the family firm needed its’ own malt whisky distillery. The site he chose was on the outskirts of the village of Kennethmont in rural Aberdeenshire, the Inverness and Aberdeen railway ran alongside, putting in a small branch line he could get casks in and whisky out. His dad William, was working in a grocer’s shop in the Glasgow district of Anderston when he married the grocer’s daughter in 1834 clever man  and began to sell whisky from the shop. In 1856 he was granted a ‘licence for consumption’ opened his first ‘Dram Shop’.  A chain of dram shops followed offering quality whisky, grew to 18, making William Teacher the largest single licence holder in Glasgow, where is Johnnie? Like many Scotch whisky distilleries, Ardmore has a name with Gaelic origins. The name literally  means ‘big headland’. Ardmore distillery still has its’ own cooperage for the production and repair of casks and Ardmore is the only Highland malt whisky to be peated since its beginnings in 1898. The sneaky bits; Teacher’s Highland Cream boasts a 45% malt content, high for a standard blend, at its heart smoky malt whisky from Ardmore. In total, more than 30 malt whiskies are combined in its secret recipe. Teacher’s also offers Origin, with a malt content of 65%, and Teacher’s 50, a 12-year-old blend with a malt to grain ratio of 50:50, containing 50 different whiskies from throughout Scotland. During the First World War, by distributing ration coupons to its customers, entitling them to five glasses of Teacher’s per week. When the war was over business resumed and they were able to fill the growing demand from its ample supply. My question is “how big were the glasses and what amount of whisky was in each ration?”

So, Russell explained to us they have basically two types in production; Ardmore and Ardlair, The latter is the unpeated jobby, mostly used for blending (some put aside for Ardmore single malt bottlings, ie; Legacy). While feints and foreshots are re-used for Ardmore. Distillation therefore is from scratch each time. I’m no whisky geek but can “get this into ma head”.  The still room has a straight line of 8 stills, where is the twin line? The pattern? The circle? With two wash stills are at either side of the 4 spirit stills in the middle – unusual eh!  You know, going around with Ando, I got to thinking “I hope they don’t get a visitor centre here, it would spoil it” (there are plans afoot). He had sample drams while I looked on disapprovingly, a great tour thanks Russell, I have been here a few times but still long to visit again. Be told, I will to be sure! 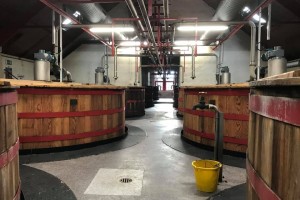 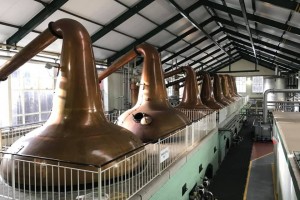