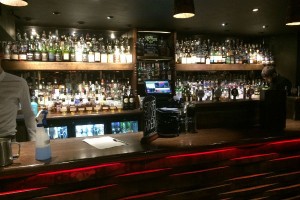 Friday; I went from Perth down to Tullibardine  – the start of the weekend. I can tell you the Tullibardine “Murray” has around 12,ooo bottles (already all gone out to market as it was bottled on allocation). It is first fill ex Bourbon, cask strength 56.1%, Marquess Range.  At this point they do not know when the second edition will be released and have not decided what this whisky will be.  Anything they do will sit with the brand image as a boutique craft distiller and so a whisky has to be just right to be considered under the range.  The second edition will be released at the earliest mid 2018.  But this one …. Chocolaty strawberries, oak barley and bakery notes (Bread or Greggs?), fruit with orange blossom (special). We (Liz and Paul) have now 8 of these glorious bottles.

The Murray is a 12 year old single malt whisky distilled in 2004 and bottled in 2016 at cask strength (see above) no chill-filtration. Released as part of their Marquess Collection, likely named after William Murray, who was the Marquess of Tullibardine. The 2nd Marquess of Tullibardine, Sir William Murray fought for the Jacobites at the Battle of Sherrifmuir on the hills close to the distillery. In 1745 he was chosen to unfurl the Royal Standard at Glenfinnan announcing the Prince as the rightful King. I’m a sucker for history. This is the first release of a Tullibardine at cask strength in a hundred years, it’s one of those “try before you die” drams, or in my case, “try before it’s all gone”!

I dropped in to pick up our case of Murray, chat and be completely nosey as to all the developments going on . As it is a half hour doon the road it is easy to “just drop by for a cuppa” a grand excuse to  see what new drams are available now/soon. Said Matthew “We are currently thinking about whether we do a second bottling this year of the Murray given the demand we have for the product, again this has yet to be decided. The series was created by the team at the distillery – we are a very close knit team and we work on the brand development as a team with regular brand meetings. Matthew Johns  Commercial Director

Tullibardine distillery founded in 1949 on the site of a brewery, said to have brewed ale for King James IV’s coronation in 1488! The brewery dates back to the 12th century. Named after Tullibardine Moor, the distillery draws its water from the Danny Burn to the south-west of Blackford village, renowned for the purity of its water, so much so that the well known Highland Spring is bottled close by from their own spring. Queen Helen, the wife of King Magnus of Alba (Scotland), drowned in a ford after falling from her horse not far from Blackford was named accordingly. So that was my weekend started with a case of whisky, reason for today? Didnee wish to take a case of whisky to Edinburgh with all those Irishers about! 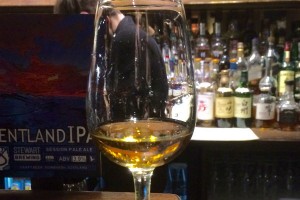 Saturday; drove over the bridge and into Edinburgh, to meet my pal PJ, he was with pals to see the game and have a grand weekend, he also brought me my bottle of Telling “Rising” and I gave him the Redbreast – we had pre – arranged this to be sure.

RISING  an Irish dram from Teeling’s. An 11 year old single malt to mark the rising of the distillery and the 100 years since the Irish Rising of 1916, Dublin – where two of my great uncles fought alongside the hero’s against the British (Paul). A handcrafted small batch, 1000 bottles and consists of rare Irish casks. REDBREAST Mano a Lámh All Sherry Limited Edition. A limited release from Midleton of 2000 bottles for Stillhouse members. I had a spare bottle of this (Paul), Mano a Lámh, means ‘hand in hand’, represents the joining of two languages, Gaelic and Galician, in celebration of the relationship between the Masters of Midleton and the artisans in Spain, who have crafted the distillery’s sherry butts over 20 years. A grand pairing for this Scotland/Ireland rugby match, not forgetting the Murray (Murrayfield is the stadium for the game – clever eh!).

Leaving PJ I then dondered into the city –  rammed with Irish. Ended up making a pub tour, just to find a space you understand to see the game. After some lunch and many visits, I ended up at Usquabae, superb craic in this pub, mega full ofrugby supporters, Irish sitting next to Scots, next to English even, that’s the way it goes with rugby. Saw the fantastic game; Scotland’s passion and relentless tackling did not give Ireland time to breathe, let alone pass the ball (or have a dram). It was just suffocating. Stuart Hogg the Glasgow player is not just ahead of his rivals, he is clear of them by some distance, my man of the match. Game over after some nervous last few minutes, Scotland win 27 – 22! I wander downstairs to the whisky bar.  Usquabae whisky bar is superb, over 400 whiskies to select from, we immediately set up a bar tab, not thinking where this was leading … started with a Balvenie 21 year old Port, as you do.  Our education included a Redbreast 15yo (Irish to be nice), Glenrothers Sherry, Dalmore cigar malt and a Dalmore King Alec. After this it all got a bit dark and confusing, wee note here; be careful when drinking with Irish. I do recall a very nice Balvenie 17 year old looking at me across the bar, so called him over and educated myself and Michael from Donegal into the Balvenie way. It was about now we heard a huge roar fae upstairs, a less intoxicated Irishman went upstairs to see what was goin on? He arrived back saying the Saxons were behind against the French, superb! We had a long discussion between ourselves and bar staff “what the hell is Swing Low sweet chariot all about?” After, or during this chat – I lost all sense and apparently was assisted back to my hotel by Mic and a friend.

Sunday; driving home, at a suitable time for the fumes to dissolve, with two good friends in the back of the car (Rising and Murray) am happy as Larry. It’s always the same on this game, my dad fae Oban, my ma fae Kilkenny, I don’t really care who wins, I win each time! My big gripe and rant; is the Saxon media, they never gave Scotland a chance, the Irish they said only have to turn up to beat us! And how did their team fare against the French, they scrambled a win only just, but that night the sports news BBC was full of a superb saxon win with umpteen minutes of coverage, Scotland got a wee mention.  Typical.  By the way saxon (English) media ANDY MURRAY IS SCOTTISH not British or English. Again, a great dram; Tullibardine Murray.