We enjoyed a whisky and golf tour with two really fun Californians here in sunny Scotland. Matt and his dad Tom, worked with us to design this whisky and golf tour, boy where they lucky with the Scottish weather! They didnee see any rain in 7 days! They played golf and drammed great Scottish whisky in the 70 degree heat! I (Paul) picked them up at Edinburgh airport, driving directly to Gleneagles for a look around this famous golf resort.

From here via Perth to Broughty Ferry where we picked up our lively (Liz) partner.A drive along the coast to Arbroath for a smokey and smoked salmon at the harbour followed, mmm. Returning towards the Ferry we called in at Carnoustie Golf Club – where they play in a day or two. Also  by Monifieth Golf Club and then to the hotel, to chill out with a drink in the bar. We left them alone for the remainder of the day/night after a long flight.

Liz and I did some whisky research in the Ferry with her pal Lynn, shame we have to research! 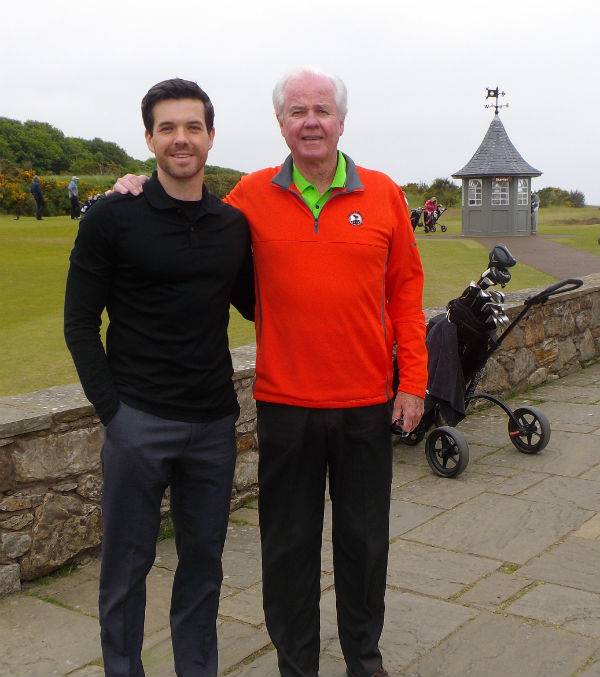 Day 2. Playing around with the locals; we had arranged for Dennis and Les to make a four ball at Monifieth Golf Course, you have to laugh, the first ball hit by Matt in Scotland, another golfer took it by error! No quite the same as Tom Watson eh who said  “My relationship with Scotland got off to a wonderful start at Carnoustie.

We stayed at a little house in Monifieth, whole week the neighbours were very respectful of our privacy. Then on the last day they couldn’t contain themselves any longer. That morning the little girl from next door knocked on door and said: ‘Here, this is for good luck.’ I could barely understand her accent. But she gave me white heather wrapped in aluminium foil. I put it in my bag and, sure enough, I won. My love affair with the Scottish people had begun. Although I’m a Yank and always will be, I clearly love being in Scotland.”.

Tom has had a charmed golfing life in Scotland, winning four of his five Open championships all three of his seniors Opens. He has won on five of the links here. It all began in 1975 when he beat Jack Newton in a play-off to take the Claret Jug at Muirfield.  Our two Californian guests also played their first course in Scotland at Monifieth, a beautiful sunny afternoon just up the road from Broughty Ferry where we had them staying for 3 nights.

As Matt said to Dennis, “Dennis, Tom Watson. Unbelievable to hear that his first hole in Scotland was at Monifieth! Dad and I really enjoyed the links we played – we thoroughly enjoyed the experience at Monifieth with you and Len, it’s one we soon won’t forget. Fantastic course and great company. You’re a lucky man to call that your local course.” Best, Matt.

We all shared drams and grub at the Ship in the Ferry that night. Nice to get our guests loosen up and come out a wee bit with a dram or 7. 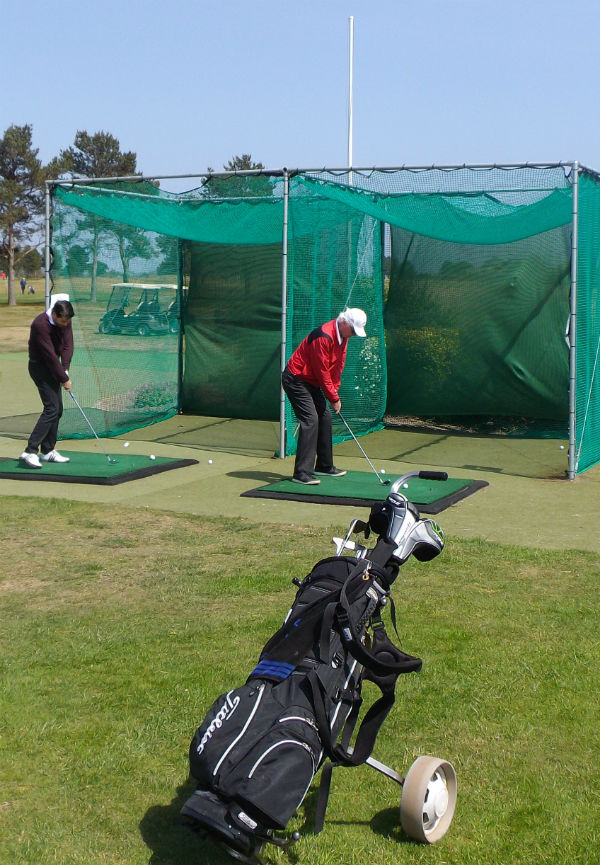 Day 3. Started with a drive to Kingsbarns Golf Club, they want to return and play this course at another time, it’s that good. Back to St Andrews, a quick tour and lunch at the Jigger Inn, a walk around the “The Himalayas” putting green, where anyone and everyone can enjoy the experience of St Andrews golf, with absolutely no experience needed! The course is owned by St Andrews Ladies’ Putting Club, but open to the public. The Himalayas costs £2 per round (£1 for senior citizens). Then up to Carnoustie for a round of golf, we left them there once on the tee, coming back to meet for a drink at the 19th. Good day again.  This is getting to be a habit!

Day 4. Leaving the Ferry and heading through Aberdeen, Huntly up to Dufftown where we all enjoyed lunch at Glenfiddich Distillery, the guys then taking the full tour. One more tour today, Glen Grant Distillery, again, they liked it there. Dropping them off in Rothes at the superb hotel, I drove back to Dufftown for my digs.

Day 5. Did I happen to mention all the drams whilst in the car? Aye they had a few.

Day 6. A drive to Benromach Distillery, Maclean’s Bakery in Forres and a round at Nairn Golf Club, what a hot sunny day it was! I collected them and took then to see Sueno’s Stone – standing over 6.5 metres (about 21 feet) high and is a Picto-Scottish Class III standing stone on the north-easterly edge of Forres, Scotland. It is the largest surviving Pictish stone of its type in Scotland. Radiocarbon dating at the site produced dates of charcoal fragments to between AD 600 and AD 1000. The interpretation of the battle scene shows a victory by Malcolm II (Máel Coluim mac Cináeda) (reigned 1005–1034) against Danes or Norse led by one Sueno.

A visit followed at Gordon & MacPhail for shopping, then back to the hotel for a nap.  More drams that night – boy this touring lark is exhausting.  We tried out a Laphroaig dram, good stuff, just like tasting an old pirate’s boot! 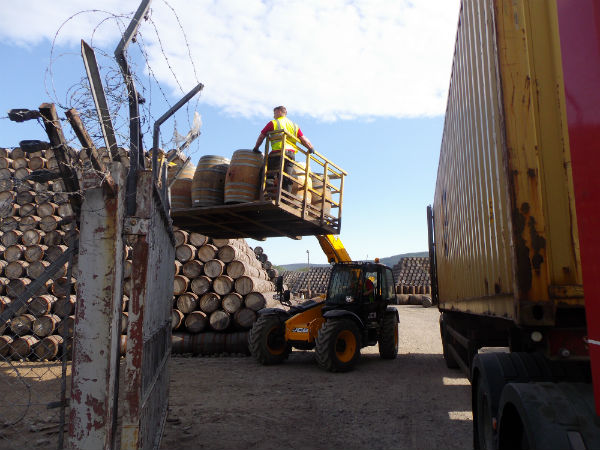 Day 7 saw us heading to Cragganmore Distillery at 10am, a private tour and taste, then back to Glenfarclas for more drams and a looksee, many thanks here Johnathan. I took them to the Mash Tun for lunch – where the fun started. Liz had called me in the morning saying she was on her way to Glasgow for a passport. She had colluded with our pal Louise who met her at Elgin station and drove here to Aberlour. She was missing out on the whisky tour and couldnee resist coming through! Was it a surprise? Is the Pope a Catholic?

Lou and Liz stayed for lunch and then we went away to Macallan for a tour – 6 pillars. Liz and myself went to do some research (well she did, I was still the driver). Picking them up again we headed the short distance to Cardhu Distillery, where we all fed the hairy coo’s digestive biscuits.  That night was long – drinking and dining at the Craigellachie Hotel. A taxi back to Rothes and then up to Dufftown where Liz and myself stayed. 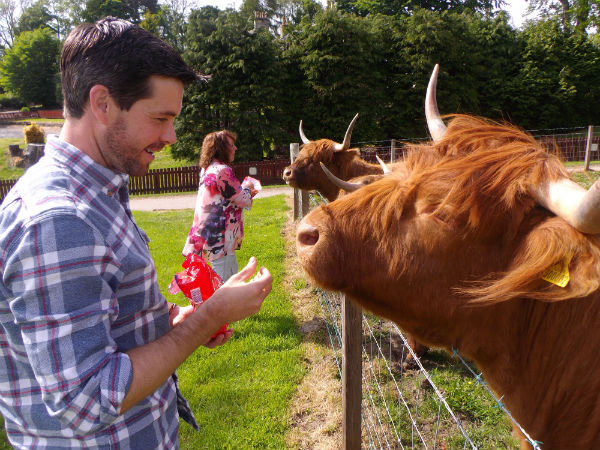 Day 8. Glen Moray tour with a difference, the lovely Emma took a private tour with drams from two casks, followed by 4 more in the shop.  A wee bit tipsy (Guests) we drove down to Pitlochry in 74 degree heat for lunch at Moulin, and a drop in to Edradour Distillery. Finally getting to Edinburgh and their final night hotel.

A great tour, thanks to everyone involved, see you again Tom and Matt.

Give us a call to book your golf & whisky tour, or through our contact page 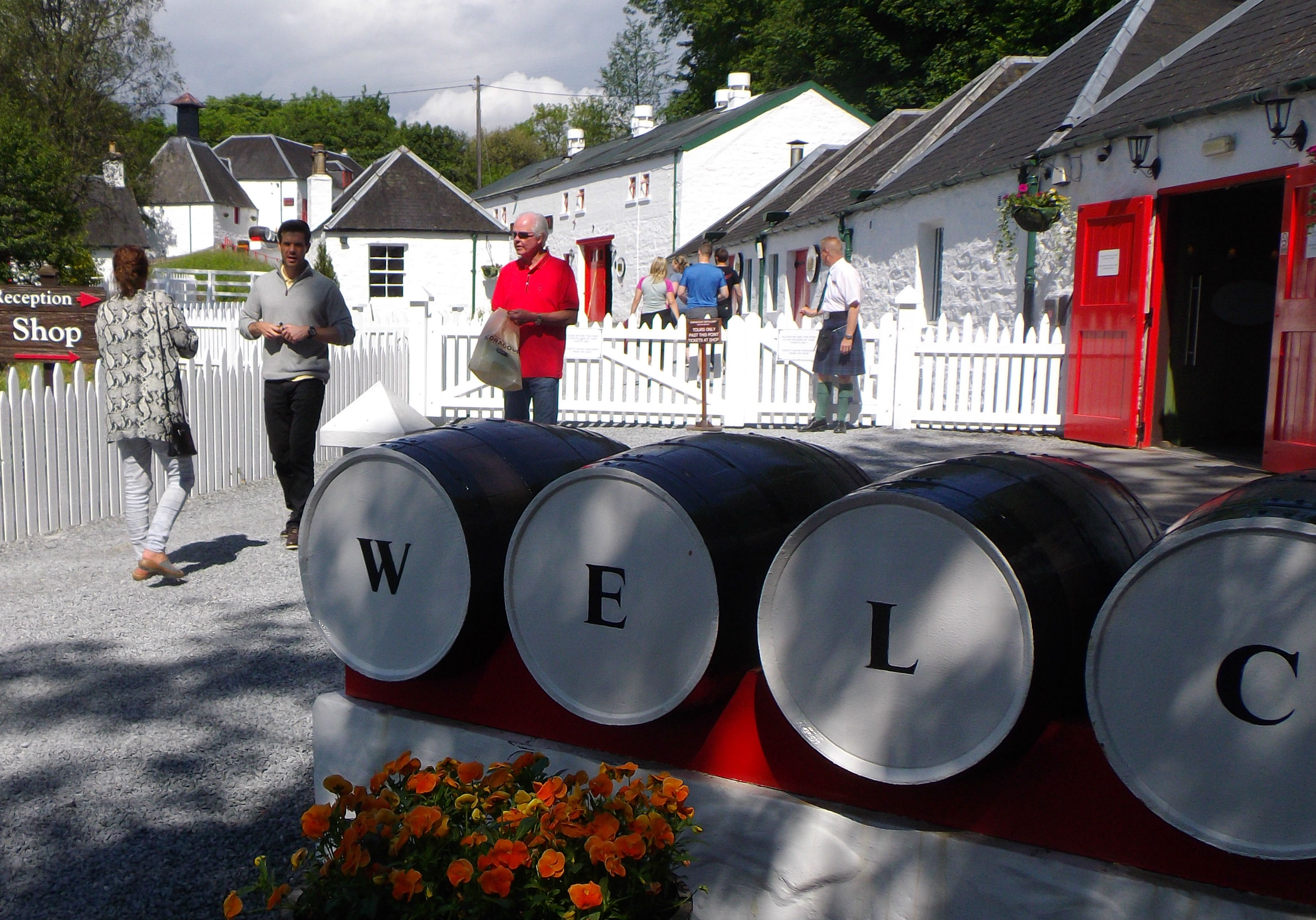 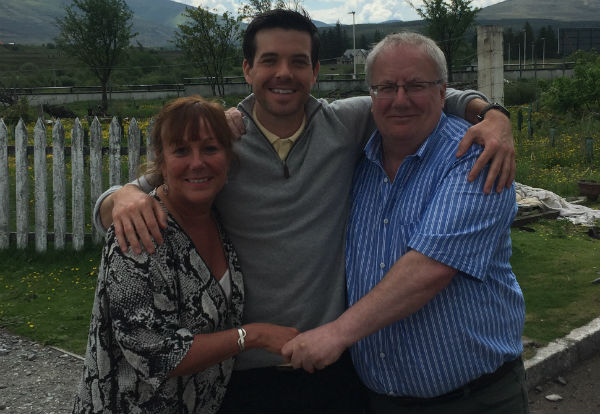 We were really sorry to see them go, two good guys, father and son and what a great couple of Americans, you are welcome back any time – but please let Liz’s liver recover first! 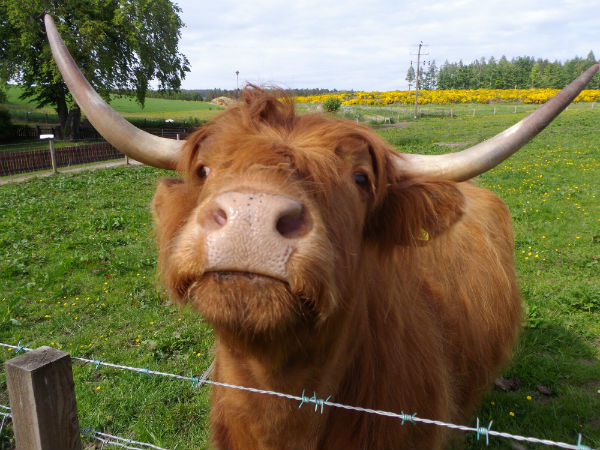